It’s unbelievable how often start up founders stifle their company from growing by not knowing how to effectively communicate their brand. From devising a tweet length pitch to having an easy to remember name, each branding opportunity is a touch point for a new customer to be attracted to what you have to offer. In this article the focus will be on how to successfully attract media attention.

In order to prepare for TechCrunch Disrupt 2012 I reviewed company bios via the official site and read taglines that said “cool” rather than what the company does. It was a surprise knowing these start ups have spent $1000s for the chance to be noticed by the right influencer, whether it be a venture capitalist, early adopter or the press.

In order to save “the next start up” from wasting time and money not knowing how to deliver their value proposition to potential leads we are about to cover how to talk to a journalist when you only have 30 seconds.

To start, let’s take a peek inside my train of thinking while I was preparing what I would report on for Tech Crunch Disrupt 2012.

I needed to have a plan to be efficient with my time during the 3 day conference. My goal was to fit in at least 40 one on one interviews with hungry start ups. My interest was to meet companies who built a tool that makes running a small to medium sized business easier. I first reviewed the “Alleys and Pavilions” company list provided by the TechCrunch site. With booth prices up to $9,500 , it blew my mind how vague the taglines were. A strong tagline is like that first glance when a man and a woman are attracted to one another. A dynamic tagline creates a spark. Taglines like “Mobile Banking Made Cool” is a hangman sinking away precious characters telling readers nothing.

One of the best TechCrunch taglines was from a company called Reesio – “Automates the entire real estate process for a flat fee of $1,000” It tells me what value the company can offer me and sets my pricing expectations. 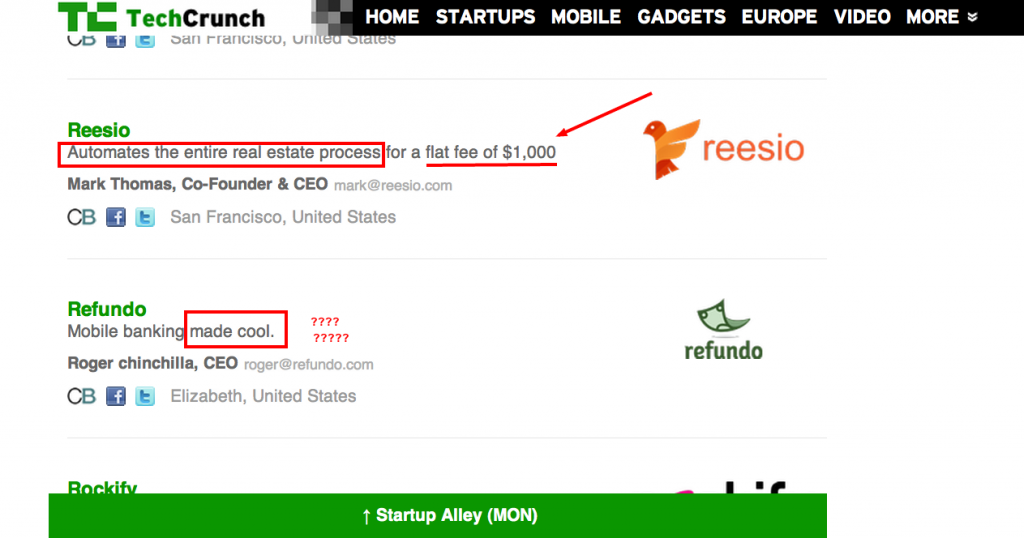 All the company taglines that caught my attention were added an evernote list. In order to have back to back interviews every 15 minutes I needed to ‘stick to the list’ and if you weren’t on the list the likelihood that I would want to interview you was low. Only if something was incredibly useful or engaging, like the Ninja Standing Desk during Hardware Alley would I make time for an ‘off the list’ interview. In order to be an off the list magnet get people at the event talking about you. That’s how I knew to check out the wall mountable best standing desk, a friend mentioned I should see it. Nothing is more powerful the a trusted referral. 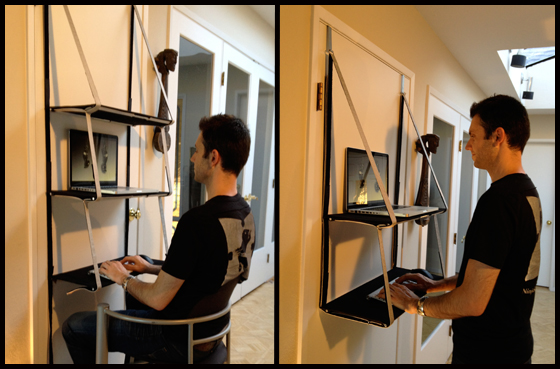 My time is valuable and so is yours. So why exchange a multitude of scheduling emails and be late for the interview, or even worse, flake. That’s a guaranteed shut door to ever robbing my time again.

Speaking of time thievery = long winded boring press releases. The numerous amount of long template press releases I received was insane. The best way to get a journalist’s attention is to know who you are writing to and what interests them. I can assure you no one enjoys reading long winded press releases when they have a huge brain candy event to physically engage with, so don’t bother sending them. To capture the media’s attention or anyone else’s for that matter, be quick, relative and to the point. This means no more than a paragraph and why it matters to the receiver. You want them to want to come to your booth right? Yes, a ton of people won’t respond to your cold call custom emails, but the number of people who do respond will be a lot higher than the response rate of an archaic monotonous press release.

Speaking of emailing, use the subject line to your advantage. Make the receiver know it is for them by including their name and something that interests them. Decide what action you want the receiver to take and only cater your email to that one action. As hard as it is to believe in this chaotic cyber information overload world, people’s brains are adverse to multitasking. Give people only one action; that means one link. Have a robust signature – delete it down to just your name and maybe phone number. How’s that saying go… KISS, “Keep it Simple Stupid”.

6 Always do a demo

If you do get to the interview, start out sharing who you are because the story of the people behind the company is, most times, more interesting and entertaining than the company itself. However,do effortlessly segway into a demo as soon as authentically possible because the most effective communication is visual. Pay attention to your who is listening and be mindful if they are engaged. Don’t just speak for the sake of speaking. There is no need to dive into detail unless detail is requested.

Know your journalist and their interests. So many “off the list” companies hammered me to interview them, but I already knew where my focus was; web applications. So if you had a mobile app I probably wouldn’t have been interested. Therefore, all the stalker like perseverance is actually static radio annoyance. I’m all for hustling, but it’s key to also know when to back off and walk through an already open door somewhere else.

8 You’re not psychic so drop the qualifiers

There is no way to know what opportunities may arise from anyone you speak with. For instance, with one start up, Boosted Boards, as I was at their booth listening to the demo, I was emailing an investor who I knew was interested in their type of product. Point being, you never know what opportunity is quietly awaiting.

The main takeaways are if you drop a pretty penny on getting a booth at an event, know how to quickly communicate your brand. To take from John Carlton answer these silent questions to people who will listen.

Pay attention if those people are interested in what you have to offer. By spending more time listening and asking questions than hearing the tune of your own voice you’ll gain more traction.