Google For Icons | IconFinder Providing The Best for Developers and Designers 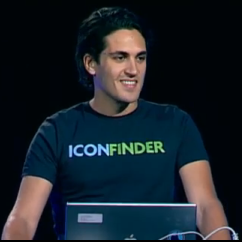 Just about every Startup at some point and especially if you do not have a designer, is going to need icons to help spruce up those websites.  TechZulu caught up with Martin LeBlanc Eigtved Founder and CEO of IconFinder.  We dive into the very beginnings of IconFinder, where Martin’s personal need led him to start the site, to how he was able to fit working on IconFinder into his school projects and all the way to where the site is now and where they are heading.

Can you briefly describe IconFinder.com?

IconFinder provides high quality icons for webdesigners and developers in an easy and efficient way. It’s basically Google for icons.

What were you doing before IconFinder?

Before Iconfinder I was working as a web designer and front-end developer, next to studying computer science and business administration. Steffen was working in another startup called 1Calendar and studying as well. We both studied at Copenhagen business school.

What was your motivation to start it?

The motivation came from a personal need. Back in 2004-2005 I was working as a full-time web designer, where we used KDE (Linux). When you use KDE you have all the icons for folder, files etc. on your hard drive in PNG-format. All the files where named e.g. user.png so I started using the OS search functionality to find the icons on the hard drive if I needed an icon in a web design or as inspiration for icon design. Frustrated of the performance of searching with the OS search, I decided to build a database and have the icons indexed, so the searching would be easier and faster. I made a simple web interface and at the end of 2006 I found it really useful so I decided to buy IconFinder.com for a public site. That domain was taken, so I chose IconFinder.net instead. The public version was launched in 2007 and got on the front page of Digg, on Lifehacker and Smashing magazine. So it really got a good start. I was lucky to launch the first icon search engine, so it got a lot of attention, that you wouldn’t get today.

From 2007 to 2009 I added a lot of icons and made minor improvements. I had a job and was studying so I didn’t have a lot of time to work on IconFinder. However I found some time to work on it in school – we had a lot of project work, and for every project I just found a way to do a part of IconFinder. Many of my courses were about databases, web design or programming, so I could often just work on a part of Iconfinder and still finish the course. In 2009 I launched version 2 and asked the talented designers at TurboMilk to do a logo. They came up with some great characters but since I’m a fan of Pixar and Wall-e, I picked the robot: http://turbomilk.com/portfolio/identity/iconfinder/

When version 2 launched with new features, better performance and new logo, the site started growing and has been ever since. At this point I still didn’t own the .com domain, which made me nervous, so I decided I had to get it before the site got more popular. I didn’t want to end up dealing with a guy who knew I desperately needed the .com domain. However, I didn’t have the money he wanted, so I had to promise one of my previous free-lance clients three web designs and ask for payment in advance. He agreed and with the money from him, I could finally get the .com domain!

What do you have planned for the site in the future?

In 2011 I talked to a friend, Steffen Thilsted, who asked me if we should join a startup-competition called VentureCup together. I didn’t have a lot of time, but he insisted. I briefed him quickly and he put together a great business plan in a weekend. We qualified for the competition and the next challenge was to compete against other startups from our region in Denmark by doing an investor pitch in front of some judges. We won in our region and got to the finals were ended up winning the first prize in the software category (and got on national television). We felt we made a great team and he got on-board IconFinder. Since then we have been focusing on finding investors to get the project to the next level. I felt I had created a useful service, but needed a guy like Steffen to turn it into a real business. I can only recommend having a co-founder!

So right now we have a lot of things planned for the future – both for IconFinder and other related services. IconFinder will become a market place where you will be able to buy and sell your icons. The trouble in market places is the classic chicken and egg-dillema, where you won’t get buyers if there’s nothing to sell, and no sellers if there are no buyers. We are lucky to have a million unique monthly users who can kick-start this market place.

On a longer term, we are planning to branch out into related services that will build on the same values of high quality content and easy-to-use interface. There are a lot of possibilities for web-based design services right now – especially with new technologies such as HTML5 that enables you to do much more inside the browser!

Jay Torres has been writing about all things interesting on his website since 2001. A sales engineer by trade, his interests include Apple, social media, mobile computing and finding the next big thing.