The brands at the 4th annual VidCon weren’t there to learn video keyword strategies, they weren’t there to pretend to be cool, they were there to understand their audience.  To immerse themselves in the culture where their potential customers are actively involved = YouTube. It’s a conference about the community, not as much a business conference. Nick Tran, Social Media Lead for Taco Bell said, “The new entertainment for teens is YouTube. If they are gonna be there we want to be there as well.”

At VidCon you’ll find a sea of 14-17 year old uber fans religiously obsessed with online stars.  These fans have a personal relationship with the stars unlike traditional Hollywood. They feel like they know everything about them because they watch their weekly and sometimes daily  webisodes. You have to be there to appreciate it.  The stars make time for and meet their admirers. It’s like a press junket for online entertainment with public access. The conference is primarily targeted to people with a passion for the YouTube platform. VidCon launched in 2010 with approximately 1,400 attendees and grew to about 12,000 people this year, (according to Wikipedia). That’s over 800% growth in just 4 years.  Industry folk are a thin slice of the pie, but those who are in attendance are the leaders in what’s to come for the business of online content. 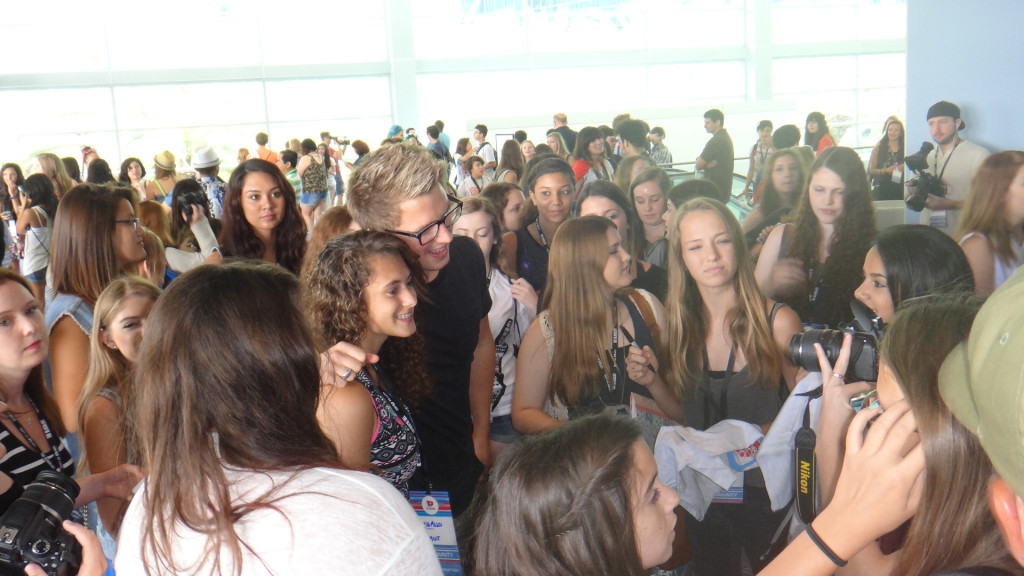 For me, VidCon is already too big, having gone for 3 years now, but it’s crazy to think most of these big media companies are seeing the YouTube cultural fan phenomenon for the first time. Many executives from media powerhouses such as CBS and ad agencies like Saatchi and Saatchi were there to experience the lifestyle of the people they market to.  Their presence indicates things are changing. Stephanie Lin, Senior Marketing Director at BareMinerals, a brand who had a huge booth offering free makeovers to attendees, said that they are moving away from traditional advertising. They get that no one wants to be sold to anymore. Their YouTube channel has many product tutorials, but they want to expand the dialogue to add value to customers day to day lives by covering culture, politics and lifestyle. She shared that there are many amazing talented women doing great things and she wants to help make their stories come to life through video. 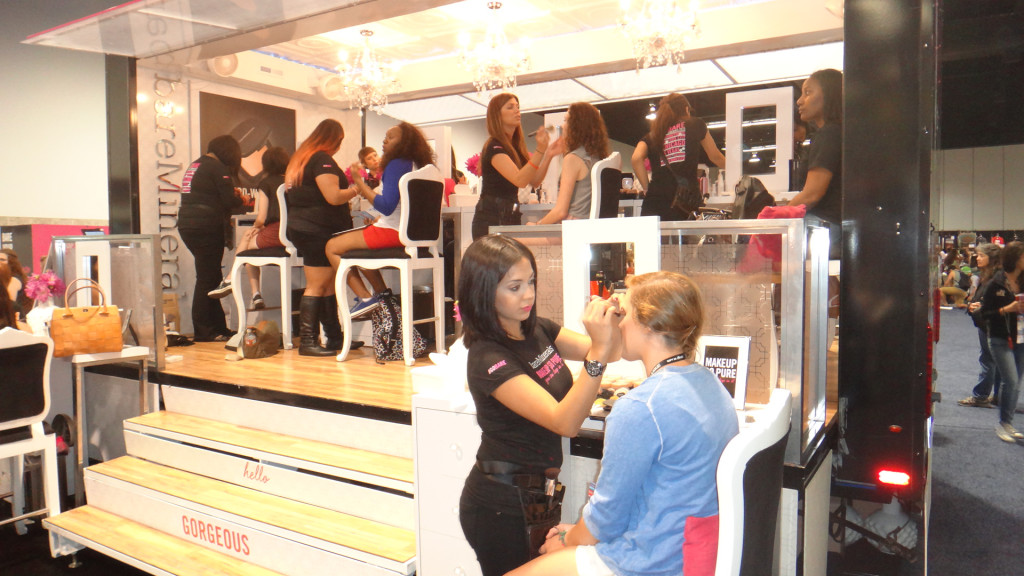 Forming these partnerships with YouTube content creators, both top stars and people just starting out, requires a sensitivity to the creative process.  Just because a brand has the cash doesn’t mean a YouTuber wants to partner with them. For YouTubers, it’s audience first and money second. Lin shared that BareMinerals understands that it is all about brand alignment; doing something that’s true to the content creator. Their intent to partner is to create stories that make a positive difference in women’s lives, “What can we do on a day to day basis to make her feel good about herself, make her feel more confident so she’s ready to put beauty into action.” We ended the conversation with her telling me she felt excited to be at VidCon, “re-inspired and re-engaged”. 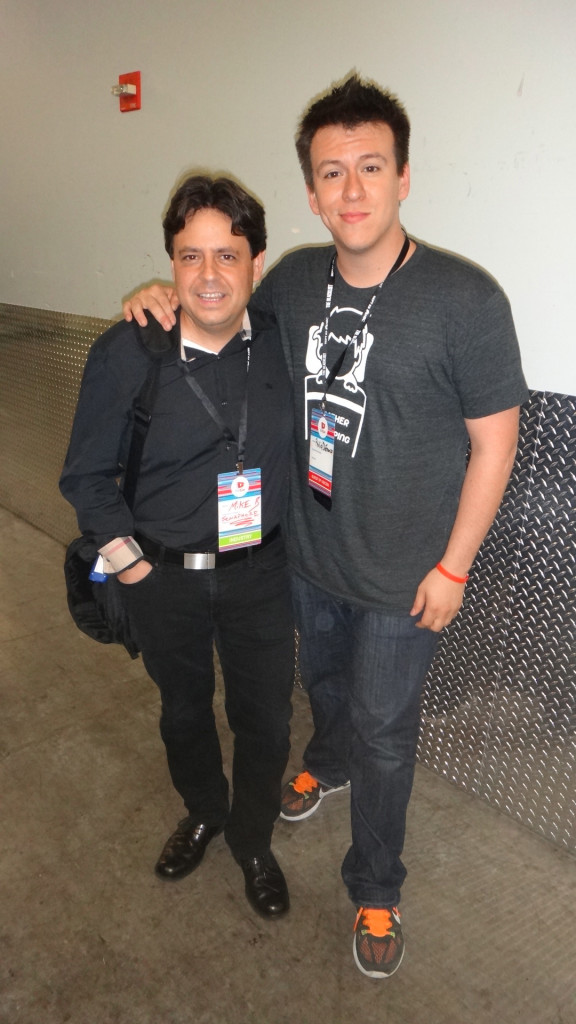 clients to help them build their brands and their businesses since the beginning. A few years back content creators were only just discovering having a YouTube channel could be a business and now stars are actually selling their corporations to much larger media firms. Bienstock’s firm, Semaphore, provided business advisory services to top YouTuber Philip DeFranco aka “SXEPhil” and his company DeFranco Creative in its sale to Revision3.

Orabrush, one of the first VidCon brand sponsors, foresaw what was to come in future years for the conference. This year they were accompanied by large companies such as Kia, YouTube, Bravo, Dolby, Intel and Taco Bell. CMO of Orabrush, Jeffrey Harmon, said that the thing he doesn’t understand is why people who market go to marketing conferences to discuss how to market, rather than spending time immersing themselves where their audience lives. Marketing is about principles and behavior, it is not about how to post an ad on facebook or how to use adwords. Those are just a foundation. Show up and you learn your audience and you become your demographic. He shared, “We bring our whole team (to VidCon) and watch everything that is going on and observe it, soak it in and then the rest of the year their whole perspective is different… If you come to VidCon you immerse yourself in the culture. You are not learning how to market specifically to any of them.”

For Orabrush, it all started with an eHow video about “How to Tell if You Have Bad Breath”. Harmon placed the video on his company website which sells a unique tongue cleaner the founder invented and sales went up, so he thought they should make their own video.  He had a roommate who was a filmmaker make it, and that kick started a tongue cleaning digital revolution into a profitable company. You can read more about the Orabrush case study here. 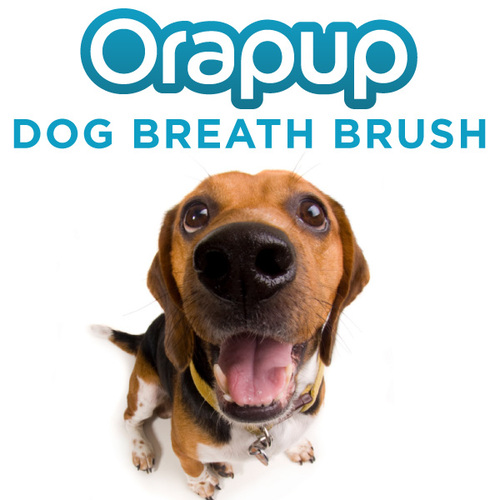 In fact, recently when they were launching their new product Orapup, a tongue cleaner for dogs, he drove all the Indiegogo crowdfunding through YouTube. They created a video geared toward dog owners. Using the YouTube strategies they mastered with Orabrush, Orapup just about sold more units than Orabrush did its first year in business in a shorter amount of time.

Orapup YouTube channel has surpassed views and subscribers of billion dollar pet brands such as Iams and Pedigree also trying to market on the video platform. Harmon brought up that people always say Orabrush got lucky, but he has consistently insisted video marketing strategies are “mechanical and methodic and Orapup is now proof of that.” Orapup sold 1 million dollars in merchandise before going into production.

He concluded with mentioning that he thinks, “YouTube is the next Comcast… more 18-34 year olds are watching YouTube than watching any cable network.”

From some of the big houses like Maker, Rev3, etc we’re going to see the ABCs, NBCs, Foxs of the next decade rise out those companies. We’re looking at a fundamental shift in the way video content is consumed.

In conclusion there is absolutely nothing more important than respecting your audience and the people who master this now will become the media bigwigs of tomorrow. 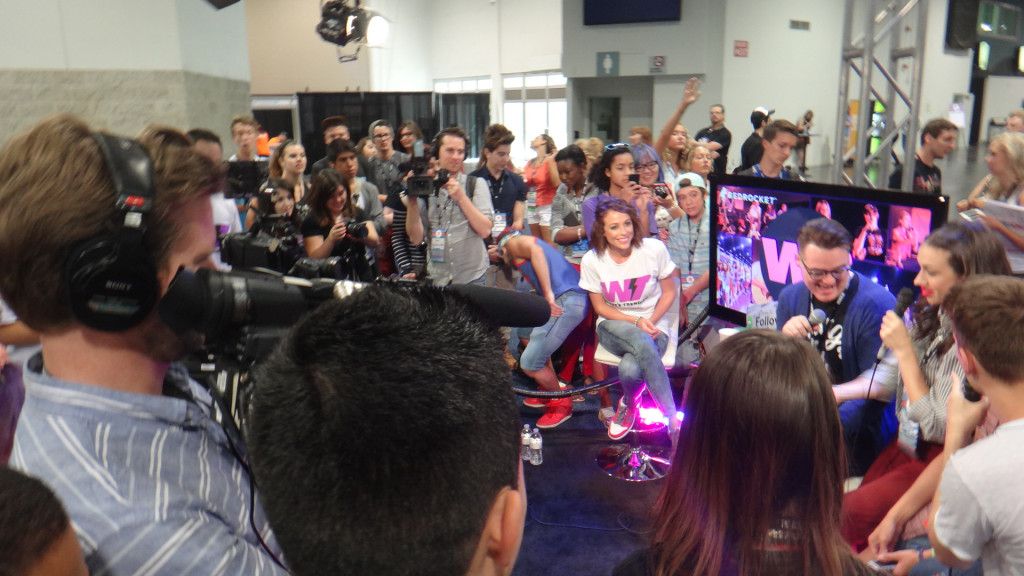