Robot Sales Growing, but Not Enough for Mass Human Unemployment 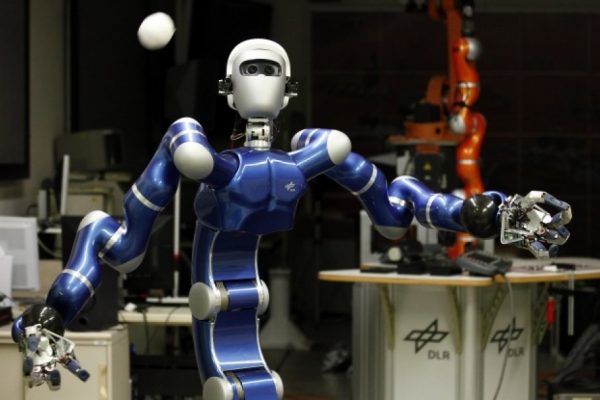 In the past few years, the pace of global automation of industry processes has been increasing at a historically high rate. The remarkable rise in the demand for industrial robots has caused a double-digit in global sales of these valuable machines. The demand for factory robots has grown drastically not only in some countries but across the world.

According to the International Federation of Robotics (IFR), companies installing the machines are not only in developed countries but also emerging economies. The federation established that 248, 000 robots were sold in 2015. Though this number shows the growth slowed to 12 percent last year, less than half the 29 percent advance in 2014, sales volume is expected to increase significantly in the coming days. A sharp fall in top buyer China saw the reduction, but since the country is hungry to automate production to overcome the pressures associated with rising wage demands and competition from low-cost countries, the percentage is bound to increase.

China Down, Mexico Up

While robot sales dropped in China in 2015, it was more than doubled in Mexico. The global automotive industry has a significant investment in plants for manufacturing cars for export in this country. Foreign robot makers still dominate the Chinese market, but IFR says domestic robot makers were working on increasing their market share from 25 percent in 2013. Everyone is trying to reap from robots, and that has resulted in a significant increase in their sales volumes.

The rapid growth of robot sales has sparked fears that automation will lead to mass human unemployment. But the concern did not come to the fore yesterday. During the 2008 economic melt-down, some economic experts alleged that automation was hindering job recovery and was in part responsible for high unemployment.

However, research has proven that the fears are unfounded. While the sale of robots is on the increase, PwC Survey indicates factories that have installed robots are in fact increasingly recruiting more employees. In the process, they are creating more jobs. The study identified more than 1.25 million new jobs that companies that make extensive use of robots have created. Moreover, econometric evidence points to the fact that industrial robots are playing a significant role in accounting for productivity growth.

The biggest surprise, considering the number of the so-called experts claiming industrial robots have destroyed jobs in the motor sector, is a significant number of employees that seven car manufacturers who added several thousands of new robots to their factory floors between 2009 and the end of 2014 recruited during the same period. Robotenomics research report shows that the auto manufacturers increased the number of their employees by over 132, 000.

Despite the global recession and claims that automation was causing employers to reduce the number of their employees, luxury car manufacturers Daimler, BMW Group, and Audi increased the number of their employees significantly during the period. Richard Morris, vice president of assembly at the BWM Spartanburg plant demised the notion that robots can replace people. He considers that since ideas come from people and not robots, factory robots can only help people achieve their dreams, but cannot replace them.

Per Vegard Nerseth, head of robotics for ABB, considers the lack of willing labor for certain tasks as a primary reason behind the proliferation of industrial robots across the world. This long-term serving manager of the engineering groups said many people today avoid dangerous, delicate, or dirty jobs. So, when the older generation of company employees retires, the firm struggles to get the right replacement. With the efficiency of technology, companies rely on robots to do the jobs much faster and create more jobs in sectors that require human labor.

Evidently, the growth of robot sales is not enough for mass human unemployment. While companies are adding more robots on their factory floors, they are also creating many more jobs in the process. And, just like any other machines, robots are also making work easier.