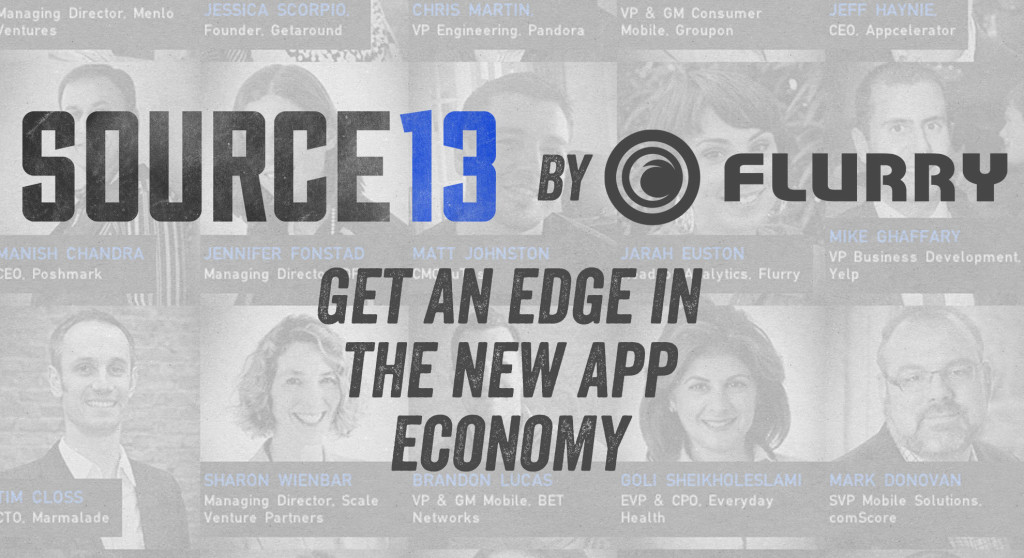 Mobile first is becoming an important part of our daily lives. We interact with the world through our mobile devices, and they are quickly becoming our main vehicles for accessing and sharing information.

While great strides have been made in the mobile economy, there are still many challenges and opportunities to consider, and much we can learn from the market frontrunners.

Hence the emergence of Source13, a new mobile conference produced by Flurry. The entire event is meticulously designed around thought leadership and fostering open discussion between the industry’s leading mobile businesses.

TechZulu was fortunate to attend the inaugural Source13 event in San Francisco, and grabbed a few key insights for you in the videos above. Here’s a quick snapshot of what you’ll learn:

Aneil Mallavarapu Blipboard – a free mobile map where local “gurus” clue you in about interesting things in your city. Mallavarapu calls Blipboard a social map that gives you location based alerts in a follower network, not unlike Twitter’s model. How do you discover the right people to follow? Where does the mobile interest graph come into play? Learn all of this and more in the full video.

Di-Ann Eisnor, Waze – a community-based traffic and navigation app with over 34 million drivers and 23 TV stations as active users. Waze passively collects GPS traces and timestamps and uses them for real time maps, traffic updates, and routes. In her interview, Eisnor discusses the nature of user acquisition, and the growing connection between cars and mobile apps. She also urges mobile app developers to think about how to respectfully leverage their audiences for mass participation. For example, Waze tapped into its community during Hurricane Sandy to help the White House and FEMA identify which gas stations had power.

Jared Simon, Hotel Tonight – a mobile app that gets you last minute deals on unsold hotel rooms. In this interview, Simon says it’s crucial to focus on your product, especially in a mobile world where the App Store reviews are all you have. You have very little real estate to deal with, so build a product that works and does what you say it’s going to do. Simon also shares his thoughts on building a strong fan base through social media and public relations. He says, “It’s better to have 100 people love you than 1,000 people who kind of like you.”

Jeff Haynie, Appcelerator – a platform for building network-connected mobile apps across native platforms. The world is changing around the app economy. The hardest part used to be the build, but now that apps have become mainstream what do you do AFTER deployment? Haynie says the biggest problem is underestimating how much it takes to build a successful mobile app. The industry itself is still so new there isn’t a clear roadmap. He believes the enterprise adoption of mobility is happening this year, and that we’re going to start seeing mobile being used AT work as much as outside of work.

Jeff Smith, Smule – a mobile app developer behind chart-topping products like Ocarina, Magic Piano and Glee. Mobile is a different animal than Web. It’s very much a physical connection between people; friends recommending new apps. Smith says it’s more of a product development question than a marketing one. Ask yourself why people really want to talk about your app and share the experience with someone else. How do you create an innovative experience people want to talk about? As for Smule, Smith quips, “We’ve been on mobile now for 4.5 years, I’d hope we’ve learned something.”

Jessica Scorpio, Getaround – a marketplace for sharing cars. The service is currently available in five markets with more to come this year. Scorpio ultimately wants to enable people to car share everywhere. She is a huge advocate of the sharing economy and collaborative consumption, noting other successful apps such as: Airbnb, Uber, TaskRabbit, Hotel Tonight, and Silvercar. She’s paying special attention to the development of the in-car app experience, and shares, “A lot of disruption is happening, but this is only the tip of the iceberg.”

Keval Desai, InterWest Partners – a firm investing across the entire mobile stack. Desai enthusiastically states, “It’s a great time to be an investor and an entrepreneur.” He notes that 1.2 billion people on the planet have smartphones and tablets. That may seem like a lot, but there are 7 billion people on earth. This means that 85% of the world’s population still doesn’t have a smartphone. You could STILL start a mobile company today and end up with a bigger market share than Google, Apple and Facebook combined. Tune in to hear Desai discuss the fundamental problems in mobile, the want economy, and how mobile is changing the news experience.

Luke Schneider, Silvercar – Similar to what SouthWest Airlines did for airline travel, Silvercar has simplified the airport car rental experience by offering a single make/model car, the Audi A4. Each car has a WiFi hot spot and satellite radio. Everything is mobile-based, from making your reservation to scanning the car with your phone to unlock the doors, to the bill which is delivered electronically. In this interview, Schneider talks about doing well by doing good, and when it makes sense to incubate a startup for a while rather than rush to market.

Manish Chandra, Poshmark – a mobile marketplace for women’s fashion. In total, America women spend $350 billion a year on fashion. Poshmark lets you make back some of this money by selling items directly out of your closet. You upload the images, and Poshmark takes care of the rest, from payment all the way to shipping. Within 30-40 seconds you can create a listing, in an hour someone could buy it, and you could ship it later the same day.

Peter Burrows, Bloomberg – moderated the opening keynote with George Lee, co-head of the Global Tech Practice at Goldman Sachs. In this interview, we discuss the mobile boom, and lack of pure mobile IPOs compared to the PC and Internet booms. Burrows believes the economy is going to look better this year and that Americans are getting used to the uncertainty in Washington. The emotion around mobile has been up and down, but people selling to the mobile ecosystem will continue to do well, and enterprise will make a concerted mobile play.

Peter Mullen, Bizzabo – a mobile networking application for event producers. Attendees opt-in to the experience, and the app tracks all activity from Linkedin connections made, to number of messages sent, etc. An “Offers” tab lets producer and related sponsors push  promotions and other information to attendees in real time during events.

Ruth Barnett, Swiftkey – a keyboard app that tackles the embarrassing auto-correct problem by using Artificial Intelligence (AI) to predict what you’re going to say next. It currently offers language provision for 54 languages. Listen in to learn why Swiftkey chose to focus on Android first, and how it rose to the best-selling Android app of 2012. Barnett discusses the emerging London tech scene, and why she made the career leap from being a national news journalist for SKY News to an unproven startup called Swiftkey.

Sharon Wienbar, Scale Venture Partners – in this interview, Wienbar discusses the investment opportunities in mobile, and what Scale Venture Partners is looking for at the mobile app level. Get her take on engagement and the classic ratio of daily and monthly active unique users. What are companies doing RIGHT to maintain users? Does gamification actually work? What’s the most valuable kind of customer? Get answers to all of these and more in the full video.

Simon Khalaf, Flurry – learn why the leader in mobile analytics decided to produce a thought leadership conference. Khalaf reveals Source13 registered over 700 individuals, with the final attendee list representing a trillion dollar market cap – not bad for an inaugural event! From ESPN to Groupon, Yelp, Zillow and more, the speaker lineup was incredible and everyone shared their views on the mobile economy both on and off stage. As for Flurry, Khalaf says the company continues to grow with the market, and is seeing growth in social networks and shopping. It sounds like there’s an opportunity for someone to create an optimized shopping experience on mobile…

Tim Closs, Marmalade – a solution for developers to build and distribute cross-platform mobile apps. Half of Marmalade’s customers use it as a porting platform, while the remaining 50 percent use it as an app development framework. Drawsomething was built on Marmalade, and EA Games (Need For Speed, Tetris), Popcap, and Activision have used the solution as well. In this interview Closs shares how to help mobile app developers cut their time to market. How important are services to the mobile app economy? Fragmentation is increasing. Connected services: ads, analytics, cross-promotions, etc. are getting harder to navigate. What’s the next mobile platform going to be?

Wilson Kriegel, Paltalk – group video chat platform. In this video, Kriegel says product development today is much more focused on consumers and the relationship they have with technology. Think about how can you use technology in more meaningful ways. Consider emerging countries and how people are engaging with their phones; India, Africa and Asia are mobile first countries. What slows down mobile adoption in more developed countries? Kriegel says mobile first means video chat will be a de facto means of interacting with and socializing with each other. He predicts once we see an audience of 20-30 million, usage will proliferate. He postulates we’ll see 1 billion video chat users in the next 2-3 years.

John Busher, Harry Balls – a humorous site offering reviews and information about mobile apps, primarily indie games. Watch the video to hear Busher’s tips on how to effectively reach out to bloggers and get publicity for your apps using release distribution services, developer diaries, visual assets, teaser trailers and more.