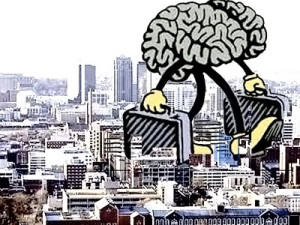 One of the hotter topics at the last Silicon Beach Fest (SBF) in Santa Monica was the exodus of homegrown tech talent. Some refer to it as “brain drain.”  Others call it “talent flight,” while academics coined the phrase “mind migration.”

Whatever clever moniker one employs, the issue of keeping engineering talent from fleeing the area is a topic that’s creating an unfamiliar feel on the shores of Silicon Beach.

And for good reason.

With unrivaled weather, a host of high-profile universities and unlimited array of daytime and nightlife entertainment, Los Angeles seems like a dreamland for young tech professionals and the companies hoping to employ their talents. But, despite these advantages, the region is finding itself in the unusual position of watching qualified graduates flee Southern California for the sheen of Silicon Valley, Seattle and Austin.

But it’s not just the pull of outside influences sapping the talent, as many of L.A.’s wounds are self-inflicted. Take, for example, the recent City Council vote to end ride-sharing services and effectively shut down an entire sector of emerging tech startups – putting both their app developers and their enterprising users stranded in no man’s land. That kind of vote isn’t exactly encouraging to companies and entrepreneurs with new and potentially disruptive business models looking to plant roots here.

The presence of Google and Microsoft’s outposts have helped to a certain extent, but Southern California can certainly do better when it comes to retaining — and attracting — talent.

At SBF, a number of good ideas were floated to do just that. The idea with the most momentum was an effort to change the tax code to offer greater incentives for startups and venture funds to headquarter in L.A.  Another idea was to tap into the talent pool at CalTech, UCLA and USC early using accessible internship programs through a public-private partnership with the City. I also heard a lot of chatter about increasing the area’s overall investment in infrastructure, including fiber, which is highly critical to the region as a whole.

Most intriguing, at least to me, however was the idea of tapping into the one thing other tech hotbeds can’t replicate: Hollywood.

For all the technical wizardry on display on movie screens, Hollywood continues to struggle to keep up with the blistering speed of technology and its impact on sales and distribution of digital content. The struggle goes beyond the issue of piracy; the entire business model of making, distributing, and profiting from the entertainment industry is experiencing the mother of all disruptions. DVDs are dying and streaming is on the rise. A YouTube video is three minutes, whereas the typical Hollywood blockbuster runs 120 minutes. People don’t just solely watch TV nowadays; they multitask with a handful of screens.

All this industry upheaval has no doubt raised the blood pressure of entertainment execs, but attendees at Silicon Beach Fest viewed the change not as a stress, but as an opportunity. Disrupting a long-standing business model is no small feat, and successfully integrating a disruptive force can be even tougher. But it is the L.A. tech community that is uniquely positioned to tackle the job of building a bridge between Hollywood and the next era of technology and consumer experience.

Whether it’s using technology to provide smarter alternatives to piracy or helping studios better leverage social media and mobile broadband, L.A. techies have a lot to offer beyond special effects. While many believe this is already well underway, the prevailing opinion at SBF was that the surface was just being scratched.

That rosy outlook permeated this year’s SBF, and not just because of the free-flowing cocktails, but because of the renewed optimism in the L.A. tech scene. It’s an optimism shared by newly elected mayor Eric Garcetti, who declared at his swearing in:

“With the right focus, with the right tenacity and drive, we can make ‘Silicon Beach’ much more than a pipe dream. With enough start-ups and teeming tech companies [we can] give our neighbors to the north a run for their bitcoin.”

That’s just the spirit Silicon Beach needs. Other cities will always be able to lure talent away. But as long as L.A. provides a tech-friendly atmosphere and fully leverages its unique position, it will be able to keep — and start stealing — its talent.

Dustan Batton is a policy intern with CALinnovates, a San Francisco-based technology coalition bridging the gap between California tech and DC policy. Batton is a recent college graduate who studied Cultural Anthropology and Political Science at UCLA.