Imagine it. You’re flipping through Vevo and watching a music video. But first, 30 seconds of commercial. You stare blankly wondering “what’s this a commercial of?” while watching the screen and registering nothing.

Ad/Banner blindness, a talent which we’ve developed rather well as a society: The ability to subconsciously block out commercials WHILE physically watching.

You wonder to yourself “Hmm… when did I get so impatient?” But shrug the thought off nonchalantly. Okay. The video’s playing now, 4 minutes go by. Video’s done and… another ad. 30 seconds this time, no option to skip. UGH.

And this in a nutshell, is what our lives as media consumers has turned into: a constant stream of impatience and auto-pilot interactions with ads.

Same video, no opening ad this time. You think to yourself, “I really like Pharrell’s shirt/Robin Thicke’s sunglasses, if I could figure out where to buy them, I probably would!” I mean, you’re human after all. When you want something you act on it; just so long as no one’s telling you to want it though, right?

But instead of hitting pause, opening a new tab, and searching Google, or waiting to be served random ads for things you might be interested in, you’re presented with the option to open a catalog and use a directed link to buy immediately. 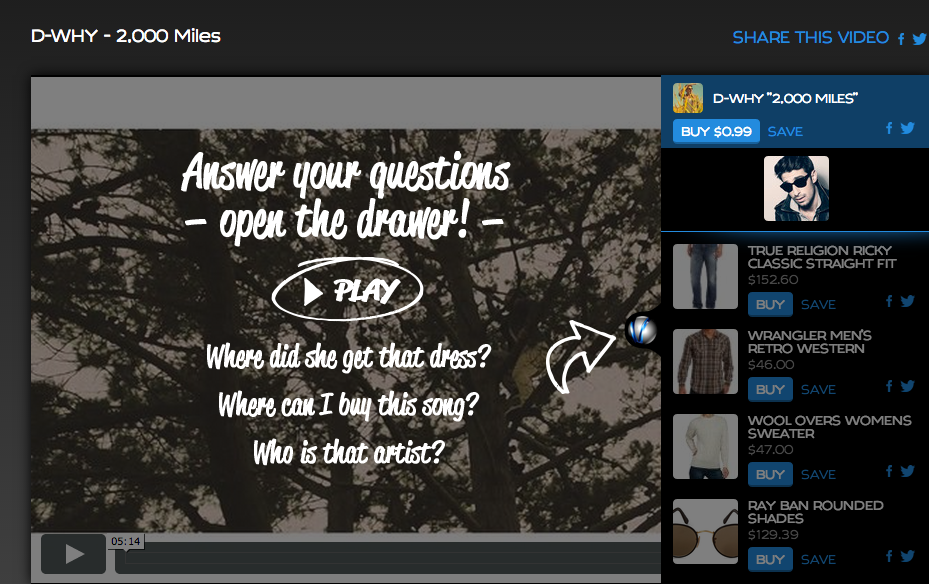 It’s the future of shopping. And it’s available today.

Enter Vidzey, the in-video shopping platform that seamlessly combines media, entertainment and e-commerce. We recently had the opportunity to sit down with co-founder Sean Kilbane and talk about, well, a bit of everything. We discuss advertising, video production, technology, business, interns, and entertainment. Here’s our narrative interview. Enjoy!

First impressions of Sean, he speaks strongly and has a cheerful disposition. Valuable personality traits in his previous life working in entertainment, no doubt.

So Sean starts at the beginning and discusses where concept for this video production facility came from. It’s a little bit of augmented reality combined with a Minority Report-esque shopping concept. Interestingly enough, the beginnings were quite simple.

“I was sitting at work, bored out of my mind. Crazy right? Working in LA’s talent and entertainment industry and I’m bored? *Laughs*. I’m staring at my screen, and there they were. Two articles, side by side. They seemed random but created a pretty significant message.”

Use digital media to change the way we consume media and shop.

And so began his steps to give this idea substance. He wasn’t the guy to figure out how to click and buy, but he did want to change the way we see advertising and entertainment.

“No one is advertising anymore and we need to increase interactivity. Think minority report.”

START  WITH THE END GOAL

Sean wanted to be able to click something and buy it right there. That was his dream. The concept goes deeper: Fast forward 100 years with the inclusion of 3d printing and we should be able to just pull something (headphones, glasses, watch, etc.) right out.

So Sean got started and called a buddy and soon to be business partner who was living in Chicago at the time. Rapid fire questions ensued: could we build this? Is the technology even possible? It was 2011, so these were valid questions. Sean had the idea, but was there anyone out there that could do this?

So after a series of phone calls and discussions they started to really nail down the steps and whittled the product into the most basic actions. Click it, buy it.

And after 4-5 weekend calls, they said to themselves, “let’s try this”. From there they flushed the idea out to its maximum capacity and wrote a business plan. Through this process, they asked themselves repeatedly those dreaded questions that entrepreneurs go through on the daily: is it the right time? Were they far along enough in this process? Should they wait until they get a Series A? What if they jumped the gun?

“In the end, we all unanimously agreed that we hate our jobs and decided to just go for it.”

According to Sean, this idea was coming in at a good time. If he was going to quit his job and roll the dice, it wasn’t going to be for just any iOS app or a regular website building company. Coming from entertainment, he saw this as a potential gold mine for whoever hit it first. 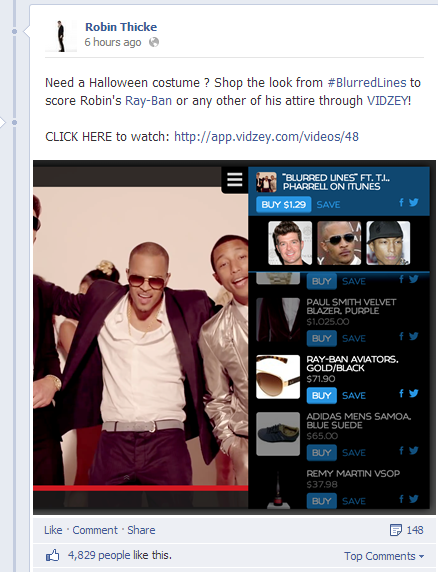 Sean paints the picture of how his career in entertainment related to the direction Vidzey started in, along with their heavy presence within the music industry :

“You’re working at a talent agency and you get spit out and move to another company. Maybe you work for a network or TV production. A lot of people go out to make their own music companies. We weren’t necessarily making the choice to start in music, it was more of an operational choice. We were reviewing the content and looking at the stats on viewership.

A huge chunk of music video plays are on Youtube, they’re digital centric, and it logistically made sense. Implementing the shopping model on a 2 hour movie is difficult and music videos generally have very low drop off points. They’re short in duration, and people weren’t doing anything to monetize them anyway. We could easily take a 3-5 minute video, and populate stores for 5-6 a day with the help of interns.

And the key to all this? “In entertainment, every person is only 2-3 phone calls away.”

Vidzey is a revenue share and affiliate marketing platform. They don’t make deals with brands but through affiliate networks. Generally, there’s two ways to go about populating a video store:

Sean discusses the possibilities of populating a store in an automated fashion. Algorithms and search data can give you ad suggestions and provide a side panel or a lead commercial for women’s apparel. It’s great and automated, but it’s not exactly curated to the level of Vidzey’s experience.

We discuss a bit more about what the future entails. He explains that they’ve come up with a great streamlined process, but automation will come as technology develops.

So how far are we from the ideal level of technology sophistication? With a shot in the dark (and some in-depth conversations with recognition-technology experts at MIT, Sean says 2025. I tell him: “I hope for the sake of your company it’s in 7 years.” We both laugh. 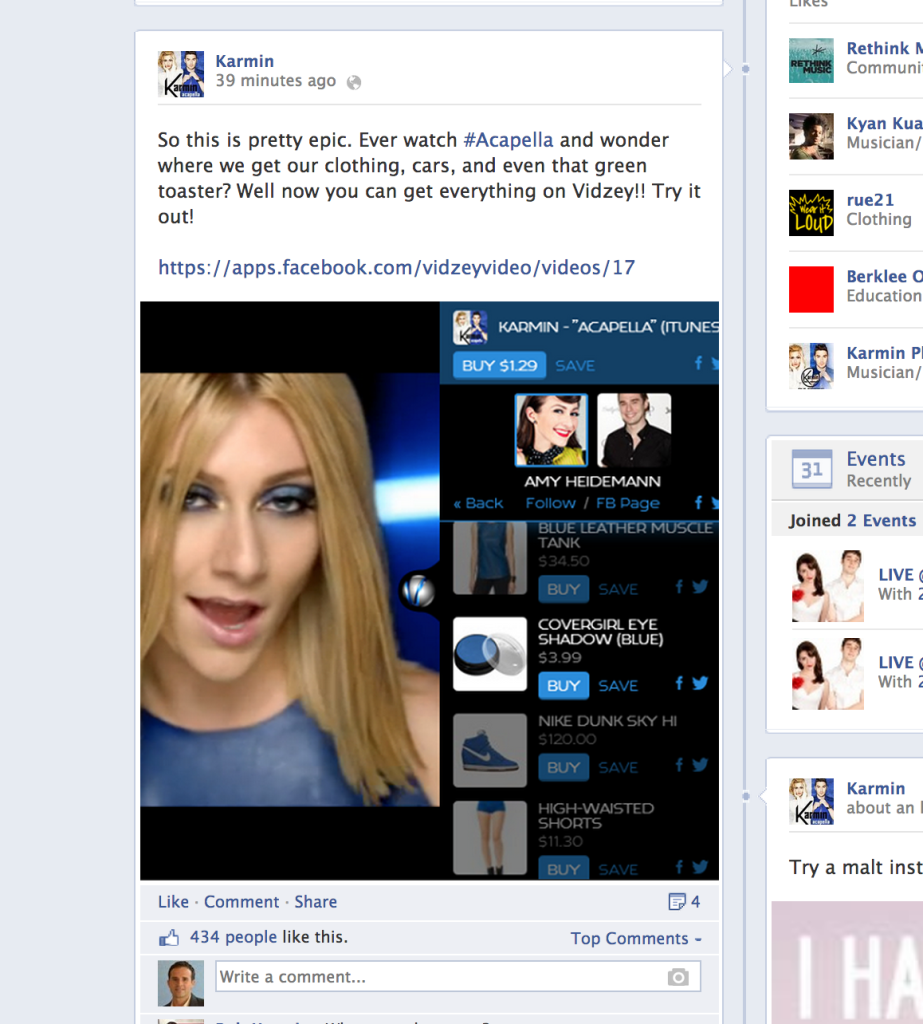 Sean continues by explaining Vidzey’s current focus on collecting data. Right now they’re in the stages of learning from their audience and seeing what people want to buy. All the questions are getting steadily answered including:

On one of my comments on how enthusiastic Sean sounds, he gives us some great insights on business and entrepreneurship.

“People have told me I’m absolutely nuts. People who are in the space tell me dramatic things about advertising like {there are a lot of dead bodies on the road}, and they ask me {what makes you think you’re the one?}

My personal belief? Things happen when the guy who comes along does it. If you don’t have that passion, it’s not going to happen. You need to have that mindset. I’ve always gone against the grain, which is crazy, or stubborn. But if you don’t challenge authority, you’ll never get there.

Here’s the challenge. You’re looking at everyone else and instead of seeing what they see, you get them to see your vision. It’s extremely difficult to convince 5-6 people to see what you do, but when it happens, it happens in a big way.”

Sean talks about his run-in with a particularly strong naysayer. Resistance and pessimism are what he’s met with. “You need content and technology!” Says the challenger, and Sean replies with a statement that shocks them:

“Actually, all I need are like, five people to say yes to this. If the CEO of Netflix said yes, even a month for a great piece for advertising, that’s all I’d need. Immediately, we’d have the content and people. It’s straight forward and simplistic, but all I need are three people at the top to say yes. Simplistic? Perhaps. But the prospect of getting the green light is what drives me wild.”

Sean believes in people and teams. Having a vision, asking if you’re a quitter, powering through the tough times, and staying determined… personal characteristics to pull your business through. A bit about the Vidzey team.

Currently, Vidzey is primarily comprised of Sean and his Co-Founder, Brian Feldkamp, who graduated from De Paul University in Chicago and ran one of the largest personal training companies in the city. Sean goes on to explain that Brian is the COO figure of the group; great at logistics and managing a team of people.

How’s they’re working dynamics? Extremely good, Sean reports. The two have known each other since 6th grade (this is where he makes the Yin and Yang metaphor) and have been good friends since then. Apparently, if we had interviewed Brian, the conversation would have been more calm and less erratic. I’ll take Sean’s word for it.

All in all, a great conversation with a very passionate startup founder. Thanks Sean!

Be sure to visit Vidzey for more information.