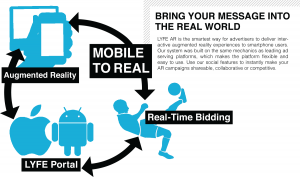 Lyfe Mobile is a new Southern California startup that combines augmented reality (AR) with traditional ad networks and real-time bidding (RTB) to offer advertisers and brands a unique opportunity to engage customers in an exciting way.

Founders Tony Gonzalez and brothers Tony and Charlie Lambropoulos came from a traditional digital display ad background, but found themselves unsatisfied with the way display ads work. Initially, they decided to join forces in 2010 to create a new ad network called Ocean Park Interactive that matched publishers with advertisers. They funded their new company with their own money and started some serious ad testing. What they found was that the ads that performed the best, often were not the most visually appealing. It is here that they realized there was an opportunity for improvement by switching to a mobile ad network platform and making a pivot into AR. 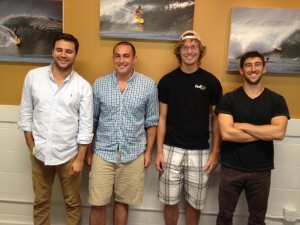 “With a phone you can make so many more interesting ad formats,” said Charlie Lambropoulos. “We had this crazy idea. What if we could build ads that people actually like on the same framework advertisers are used to?”

“If you think about the millions of people that play little social games, why can’t a brand be empowered to create their own micro-experience with users?” said Lambropoulos. Lyfe Mobile aims to make advertising experiences that users seek out and enjoy.

Lyfe Mobile works on both iOS and Android smartphones. The founders bootstrapped Lyfe Mobile and plugged away until they received their first round of funding. They hinted that there will be a big partnership announcement in the coming weeks. Expect interesting things to come from Lyfe Mobile.